This webpage contains dozen of articles from Brethren magazines in this period, as with the following page on South African General Mission (SAGM). Both pages contain key articles describing their new “little school(s) in the bush” and encouraged supporters to send help. (Both mission groups are described at great length in the e-book.) On both pages, pdf files of hundreds of journal articles can be opened through pull down menus and read online.

All are very old articles that were published in Echoes of Service from 1907 to the 1940s, followed by articles from various other lesser Brethren periodicals: Voices from the Vineyard, the Fields, Links of Help and Across the Seas (for children). The articles in Echoes start in 1907 when Dr. Walter Fisher opened Kalene Mission in Mwinilunga District.  The little schools that were opened would slowly evolve into the NWP’s modern educational system. Besides the NWP, I have included many articles on the geographically adjacent parts of eastern Angola and southern Democratic Republic of Congo” (Congo DR), which together formed what the Brethren collectively called “The Beloved Strip” as shown on the rightmost map below. Both maps expand when clicked on.) 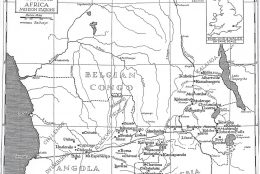 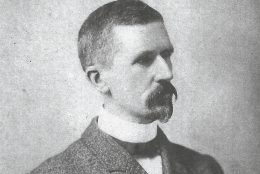 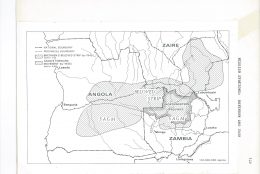 Comments on the historical maps and F.S. Arnot. The Brethren’s assemblies most noted missionary was F.S. Arnot. He explored a large area of south central Africa that stretched across eastern and northern parts of Angola into Northern Rhodesia and the southern Congo. (The Brethren called this area “The Beloved Strip.”) Dugald Campbell also became extremely famous in the U.K. as another Brethren missionary. He lived most of his life in the southern Congo DR. The map on the left appears inside the front cover of his book Blazing Trails in Bantuland (London, Pickering & Inglis, 1933). As the map was created well, it may help researchers.  The map on the right is taken from my dissertation and e-book and also covers “The Beloved Strip” plus the SAGM’s areas in Angola and the NWP.

During my research over 30 years ago, I made notes on all journals (periodicals) until Zambia’s Independence in 1964.  Unfortunately in following years I destroyed all materials beyond the 1940s. Fortunately, I did not destroy my research notes and comments, which are now 40+ years old. Appropriate notes and comments are included at the end of each periodical’s articles that might assist at least a few young scholars doing research on the NWP and the origins of the modern educational system. (These materials were used when I wrote my dissertation, and are often referred to in my e-book.)

Some tips on using these old articles. All have been added to the website by the same method used on the webpage “Archive Transcripts” , i.e., when the user clicks on the label, the material pops up in a separate screen (window). As indicated, some years contain dozens of pages. A red divider separates each segment; generally just a year or two. To help the reader, the chronological pop up pages are numbered by numerals, e.g., A1, A2, B, C, etc.. For each group of articles, key geographical and place terms, plus the names of key people (“actors”) are given to help in searches. The pdf files from periodicals often contain extraneous research side notes, which helped me write my dissertation over three decades ago in the pre-computer days. Obviously the reader must ignore these.

Although these documents from periodicals are very old and hard to find, they cannot be considered truly “archival” as they were/are published material. I am also aware that many of the pictures look quite grainy and scruffy but I do not have better ones. The sources are given for any scholar who wants to replicate them in a more satisfactory manner.

The top picture below that was sent by George Suckling is of “teachers and out-school teachers attending a Bible-school at Chitokoloki.” The second picture is a cover page from Echoes with Chit’s school boys and school girls. 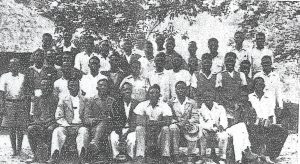 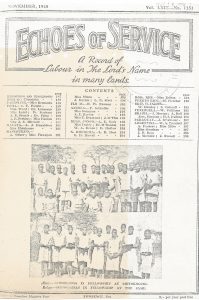 Notes and Comments on Echoes from 1905-1945: These were mainly written in 1975 starting with Jan. 1905 (Vol. 34) and much of the rest of this paragraph is quoted or paraphrased. In the early volumes were many references to F.S. Arnot and also C. Swan as they were by that time very famous in the U.K. for their travels and missionary work in Brethren’s “The Beloved Strip.” Early in the period 1905-1915 what is extremely notable was the educational work (emphasis on) at Koni Hill (Katanga), the Angola stations (more settled in Bihe), and Luapula (Northern Rhodesia). This was in contrast to Kalene, which was founded firstly as a sanatorium for European workers as it was considered healthy. It was also near the Lunda and Luvale groups that Dr. Walter Fisher wanted to evangelize and was sort of geographically the middle of other regions of the Beloved Strip. Hence little mention of education here in contrast to Luapula. Possibly one of the reasons for the later lag of education in the NWP.

Articles from other Brethren periodicals

Notes and Comments on Links of Help. Glasgow: Pickering and Inglis. Published from 1911 to 1935. In January 1936, it was incorporated into The Harvester that was in Bath (later London) by Paternoster Press from 1923. It was published for Brethren assemblies as a supplement for Echoes of Service for Misionary Study Classes (M.S.C.). It did not strive to reproduce “hot off the press” news from the  mission field, but to digest it for M.S.C. groups and classes to arouse and maintain their interest in supporting missionaries by describing their challenges. Many issues were available at the British Museum.

Mwondela family and Brethren Assemblies. I was fascinated by the following article and photo in 1951 in Across the Seas. Since the earlier days at Chitokoloki, the Mwondela family has been an important name. The original Mwondela (first name never given) was referred to many times by George Suckling and he appears in a 1907 photograph earlier on this page. Through ups and downs, his direct descendants are still involved in the assemblies. Two key lines of the families are John (below) and Willie. There is an audio-transcript of my interview with John on my Interview webpage. 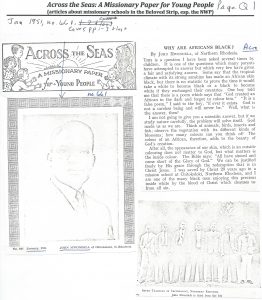 Other Notes and Comments about Voices from the Vineyard. Seems to have started in 1905 (New York) as the main USA and Canadian periodical that supplemented Echoes of Service. In 1938 The Fields also began publishing (see below) and they merged in 1971 to become Christian Missions in Many Lands (now Missions)

Notes and Comments on The Fields. Published in Fort Dodge, Iowa: Walterick Printing Co., from 1938 to 1972.  Along with the much older Voices from the Vineyard, it was one of the two main periodicals in the U.S.A. and Canada that merged in 1971 to become Christian Missions in Many Lands (now Missions).

Other Brethren periodicals for which I either took no notes and/or were not published before 1945. Many are still being published but I stopped checking and using them after the mid-1980s. Also, as noted elsewhere, I destroyed all my notes after 1945.